Huge sporting stadiums may be a thing of the past, with stadium design now focusing on spectator experiences and comfort, and the move to TV and online viewing. However, nothing beats being part of a sell-out crowd of fans watching their teams battle it out on the field, and there will always be a place for watching live sporting events.

We have listed only the classic enclosed stadiums, not including horse and car racing venues such as Indianapolis Motor Speedway which can be expanded to cater to up to 400,000 spectators. Also worthy of note is Strahov Stadium in Prague, Czechia, a stadium which is no longer used for competitive sports events (just large concerts!). It has a capacity of 220,000 (56,000 seated).

These listed capacities were from figures published in August 2022 and are subject to change.

Source: the original data was taken from https://en.wikipedia.org/wiki/ List_of_stadiums_by_capacity though it is added to and updated as new information is found. 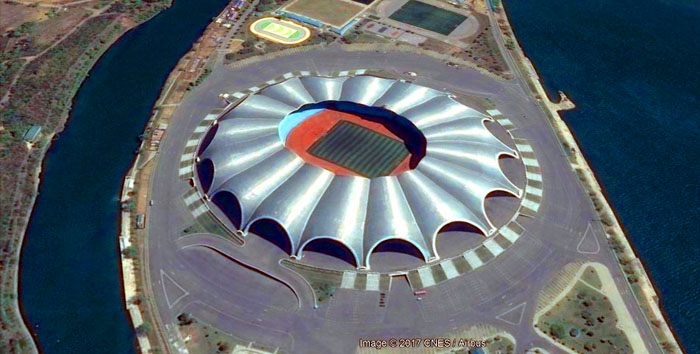 Stadium capacity is listed as actual seats where a spectator can buy a ticket for a sporting event. This does not include press box seats, standing room, and added chair capacity. Some stadiums are able to modify the seat arrangements depending on the event. One such stadium is the Cowboys (AT&T) Stadium in Arlington Texas, which is listed as having a seating capacity of 80,000, but apparently it is expandable to 105,000 with standing room.

Other large sporting venues (but not stadiums)

The list of largest stadiums is for classic enclosed stadiums and does not include horse and car racing venues. A large sporting venue that is in use (but is not a stadium) is Circuit de la Sarthe, the site of the 24 Hours of Le Mans motor race in France. It has a capacity of 263,500. Other large race tracks are also not included, such as the Indianapolis Motor Speedway which has a capacity of 257,325. Another large venue is the Tokyo Racecourse with a capacity of 223,000 (with seating for 13,750).