The Superstars was a popular TV show in both the US and in Europe, in which athletes battle it out against each other to determine the greatest athlete. The original show on ABC (USA) was aired in 1973, followed shortly thereafter by a BBC (UK) version later that year. There have been slight modifications over the years, but the format remains relatively unchanged. See also a discussion about TV Athlete Challenges, part of the attempt to find the World's Greatest Athlete.

Athletes compete against each other in a wide range of disciplines, collecting points according to their score or time. Athletes are usually barred from competing in their own specialty. The winner of each event is awarded 10 points, followed by 7, 4, 2 and 1 for the next places. The overall winner is the athlete with the highest aggregate total.

Over the years the format has varied for the US and UK version and other versions around the world. In the original ABC version an athlete could compete in up to seven events, but not in the sport of his or her profession. the athletes opt out of one event and are pulled out of another. The US version was out of 10 events.

Some of the Events

Here are some of the events that have been featured on the show. Most of these came from a list of the UK events. 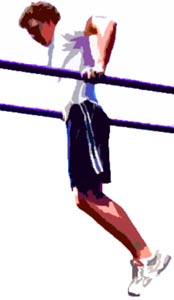