Measuring weight in sports is important for determining body composition and for monitoring changes with diet and exercise. In sports, high body weight is associated in sports such as weightlifting, and low body weight with jockeys. Here we discuss the extremes of weight, the lightest and heaviest humans, though the people mentioned below would struggle in any sporting situation, and are usually not very healthy.

This information about the extremes of body weight may not be complete, and needs to be updated as people grow and also as many of the people with extremes of body mass have medical issues and may not live for long periods.

According to the Guinness Book of World Records, the heaviest person ever was American Jon Brower Minnoch (born 1941), who had suffered from obesity since childhood. As an adult he was 185 cm (6 ft 1 in) tall. Here are some of his weight measurements: 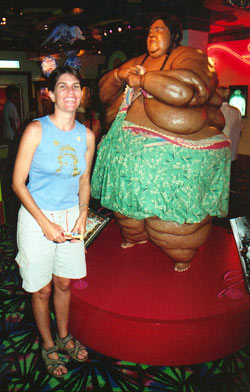 Here are the record weights of the heaviest children (male or female) at different ages. Only reported weights are included. I collated this data during 2012, there may be more recent results to be added, and the data is not necessarily complete.

The original table data was taken from: Kinanthreport, published by ISAK in 2010. The data has been elaborated and added to using information from various sources online.

The lightest baby born (and survived): there are many babies born prematurely at very low weight, and many of these babies are unlikely to survive. The lightest baby to have survived was Amillia Taylor, who weighed just 10oz (284 grams), and was 9.5in (24cm) in length. She was was born at just 21 weeks and six days gestation on 24th Oct 2006 in Miami, Florida, to parents Sonja and William Taylor.

The lightest adult of all time is believed to be the Mexican woman Lucia Zarate who weighed only 4.7 pounds (2.13 kg) at the age of 17 (and was 21.5 inches tall). She had put on weight, and was up to 13 lb. (5.9 kg) by her 20th birthday. She was born in 1864, and was the first person identified with Majewski Osteodysplastic Primordial Dwarfism Type II. She apparently achieved her full growth by the age of one year. She died at age 26.