The Olympic Games brings together the best gymnasts in the world. Studying the changes in anthropometric measurements of the Olympic all-around gymnastics champions can demonstrate how the size and shape of the athletes have changed over time. Gymnasts have generally always been small, as it gives an advantage of better balance and easier rotation in the air, though the diminutiveness of the female gymnasts in particular has been more pronounced in recent times. The following quote highlights the turning point in the 1970s (Nauright and Parrish, 2012)

"Until the 1970s, Olympic [female] gymnastics medalists were typically 22-23 years old, 5 feet 3 inches tall, and 120 pounds. However, at the Montreal games in 1976, changing body types were evident on the competition floor; the average ages and dimensions of winners were shrinking: The typical age was 16.6 years; the height was 5 feet; and weight was 101 pounds. The trend toward younger and smaller athletes, prefigured by Ludmilla Tourischeva in 1968, became the norm during the 1970s."

The lower average age of competitors plays a part in their decreasing body sizes, though changes in the age rules have tried to limit this. In the 1970s the average age of Olympic gymnastics competitors began to gradually decrease, with teenage athletes the norm. In response to the increasing demands of the sport, the age restriction for senior-level competitions was increased in 1980 from 14 to 15 years, then raised again to the current level in 1997 from 15 to 16. 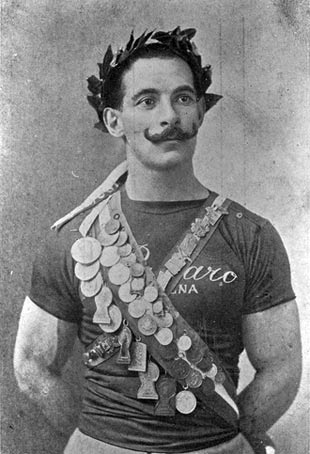 An analysis of all the female US Olympic gymnastics teams by Sands et al. (2012), found that when using linear correlations height, mass, age, BMI have been declining since 1956. This is similar to the result you will see below in the analysis of just the Olympic champions. However, against this trend, second-order polynomial curve fits indicated that in the last four Olympic Games the gymnastics have been getting larger. Maybe we are seeing changes in the ideal body shape required to be a successful gymnast.

Here are tables of the height, weight and body mass index (BMI) of the male and female Olympic Games all-around gymnastics champions. Unfortunately, data has not been found for many of the early Olympians. The table data is presented graphically below, clearly showing how these measures have changed over time (years 1956+). Generally, the winning gymnasts have become shorter, lighter and with a lower BMI, with the changes more pronounced in the female gymnasts.

source: height and weight data was collected primarily from the Wikipedia profiles of each athlete, and when none was available, from the sports-reference.com website. Since 2012, data is from the official athlete database.

The average heights of the Olympic all-round gymnastics champions has generally decreased in the data shown from 1956 until 2012. The decrease in height is more pronounced for the women (red) than the men (blue)

The body weights of the Olympic all-round gymnastics champions has generally decreased in the data shown from 1956 until 2012, in line with changes in height. The decrease in weight is more pronounced for the women (red) than the men (blue)

The BMI of the Olympic all-round gymnastics champions has also has generally decreased in the data shown from 1956 until 2012. The decrease in weight is more pronounced for the women (red) than the men (blue) , with early champions having a BMI over 20, and recent winners from 17-19

Note: This analysis is for illustrative purposes only. The data was from many different sources, and may also not accurately represent their anthropometric measurements at the time of their competition.