Usain Bolt at the Olympics

Without any doubt, Jamaican Usain Bolt is the world’s greatest sprinter of all-time. He won eight Olympic sprinting gold medals, and is the first man to win the premier 100m sprint three times, in 2008, 2012 and 2016. Aside from his incredible winning ways and record-setting exploits, Bolt is also renowned for his signature “Shh” antics and the “Lightning Bolt” moniker.

Bolt made his debut at the 2004 Athens Summer Olympic Games at the age of 17 but he sustained a torn hamstring injury and failed to make his presence felt. But four years later, he went berserk as he stole the thunder from his rivals en route to capturing two gold medals in the 2008 Beijing Summer Olympic Games and became the only athlete to win gold in the men’s 100 meter and 200 meters in a record-setting fashion.

Bolt won gold again in the 100 meters event at the 2012 London Summer Olympic Games by edging out Yohan Blake, who settled for the silver medal. Bolt submitted an impressive time of 9.63 seconds to establish a new Olympic mark. The sweet victory was Bolt's second straight gold medal in his pet event. Bolt recorded another sprint double when he won gold in the men’s 200m. 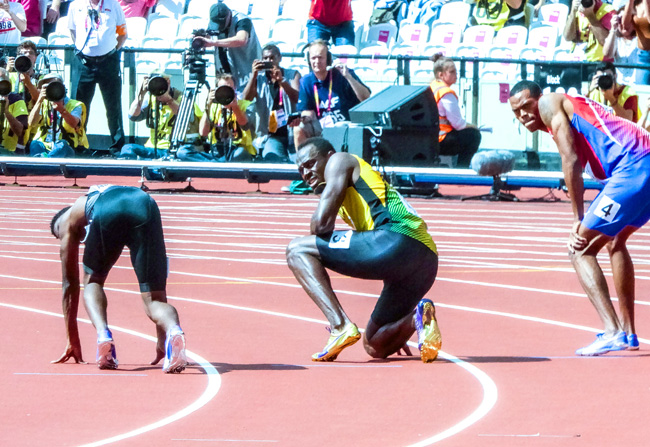 He was also part of the Jamaican 4×100m relay team that finished first in the 2008, 2012 and 2016 editions of the Olympics, though his relay medal from the 2008 games was later taken from the team due to another athlete's doping violation.

His Olympic performances have cemented his title as the world's greatest sprinter and possibly the greatest Olympic athlete ever.