Who is Australia's Greatest Athlete?

Australia is well known for its sporting prowess. There are many well known sporting champions, such as Ian Thorpe, Greg Norman, Cathy Freeman - though the greatest may come from another era. Reginald 'Snowy' Baker was elected to Australia's sporting hall of fame, having competed at state or national level in an amazing total of 29 sports, and represented Australia in Rugby Union, swimming, polo, diving and boxing. He is the only Australian that has competed in three sports at the Olympic Games: Diving, Boxing and Swimming - all in 1908.

Since 2009, there has been a TV program (Rexona Australia's Greatest Athlete) to see who is Australia's greatest. "Greatest' is not a simple thing to define, and for the purpose of this series they looked at the greatest in terms of all-round fitness and all-round sporting skill. The athletes are selected based on their high skill level in their chosen sport, with its specific fitness demands, though in these challenges they needed to excel a large range of fitness tests and a series of skill tests based on all the sports represented by the athletes. 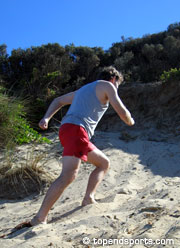 Over the series, each athlete is tested in 15 challenges, and the winner determined by the athlete that performs the best across all 15 tasks. In every episode competitors must face two challenges. Firstly, they have to complete a skill challenge based on one of the specialty sports of their opponents. The second task is a test of general athletic ability, with a focus on physical attributes such as strength, speed and co-ordination. See the page about each series for detials of the challenges, the athletes and the eventual winners. So far a rugby league or union player has won every series, with NRL star Billy Slater winning the first two series. See more about Series 1 (2009), Series 2 (2010) and Series 3 (2011). Read also the discussion about TV Athlete Challenges