One missionary, Jean de Brébeuf, was the first to write about lacrosse and thus gave it its name. He described the Hurons in present-day Ontario playing "crosse" in 1637. Some say the name originated from the French term for field hockey, le jeu de la crosse. The word 'crosse' comes from the French word for a bat or stick used in sports.

Modern lacrosse in Canada has been a popular sport since the mid 1800s. In 1856, the Montreal Lacrosse Club was founded and rules were codified to shorten the game and reduce the number of players to twelve.

Only field lacrosse was played until the 1930s, when indoor 'box' lacrosse was invented. This fast-paced version of this sport is usually played on an indoor ice rink with the ice removed or covered. Box lacrosse is now the most popular version of lacrosse in Canada. 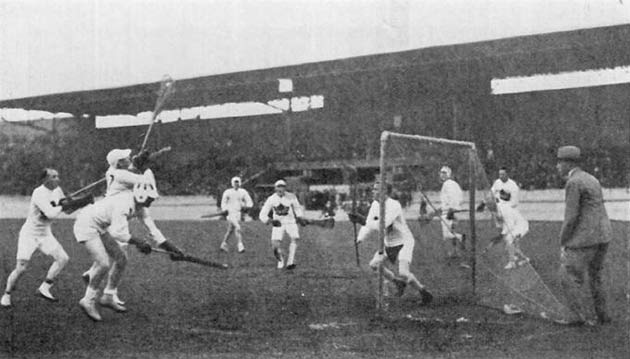 action shot from the Lacrosse Demonstration in 1928
from: The Official Report of the Olympic Games 1928

Lacrosse has been on the official Olympic Games program twice, in 1904 and 1908, with a team from Canada winning both times, and then appeared on the program as a demonstration sport at the Olympics in 1928, 1932 and 1948. Lacrosse also appeared as an exhibition sport at the 1978 Commonwealth Games held in Edmonton, Alberta, Canada.

Another version of lacrosse, called Intercrosse, was developed in the 1980s. Intercrosse is a modified version developed to make the sport safer for juniors and beginners. In 2021, the World Lacrosse Sixes format was introduced, an exciting new smaller-team faster-paced lacrosse format making the sport more accessible.