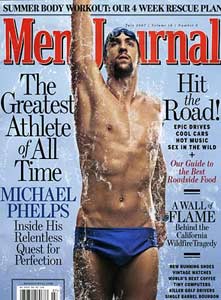 There have been numerous polls and lists published on who people think are the greatest athletes in the world (see more). Here are the results of one such list of the 'Best Athletes in the World' published in the 2003 June issue of Men's Journal in the US.

The voting panel of experts included former athletes (such as Olympic downhill skier David Currier), renowned sports physiologist Jim Wharton, orthopedic surgeon Dr. Richard Steadman, and ESPN commentators Jeremy Schaap and Stuart Scott. Writer Paul Hochman began by identifying the top athletes in 75 sports, then whittled the list down to 20. The panel then voted for the top 10 using seven criteria: strength, speed, agility, endurance, hand-eye coordination, creativity and buzz factor, with each getting a score up to ten.

The greatest athlete in the world (in 2003), according to Men's Journal, was the fine specimen quarterback Michael Vick. You will notice that there are no women on this list (it is a men's journal after all), and only one athlete per sport was included.