Maintaining body water balance is important for preventing reductions in sporting performance both physically and mentally. During an intensive game or training session, particularly in hot, humid conditions, sweat loss can be excessive. Replacement of this sweat loss is essential to keep the body in a well-hydrated state. When sweat losses are high, athletes may find it difficult to replace this loss. Accessing fluids from water bottles may be a limiting factor in the replacement of fluids.

We know that fluid consumption can be affected by several factors, and thirst is not necessarily the main one. The flavor of the fluid has been shown to enhance consumption (Wilmore et al., 1998). The availability of fluid may also be a factor. This study was to investigate what effect the bottle flow rate may have on the quantity of fluid an athlete consumes. The reason that flow rate may influence consumption is that a larger nozzle/ mouthpiece may allow a greater rate of fluid release into the athlete's mouth. This is particularly relevant in sports in which the time available for rehydration is limited (only short breaks in play).

Team sports that have a limited number of breaks in play and limited time during breaks to drink may be particularly affected. There is currently no research that looks at this factor and its effect on fluid volume consumption during exercise.

The first hypothesis is that a larger nozzle/ mouthpiece and hence greater flow rate will influence fluid consumption of athletes by allowing a greater rate of fluid release into the athlete's mouth while drinking. The second aspect of this study was to determine if this greater flow rate and increased fluid consumption would lead to more adequately matched fluid intake with fluid losses during exercise, meaning improved fluid balance. 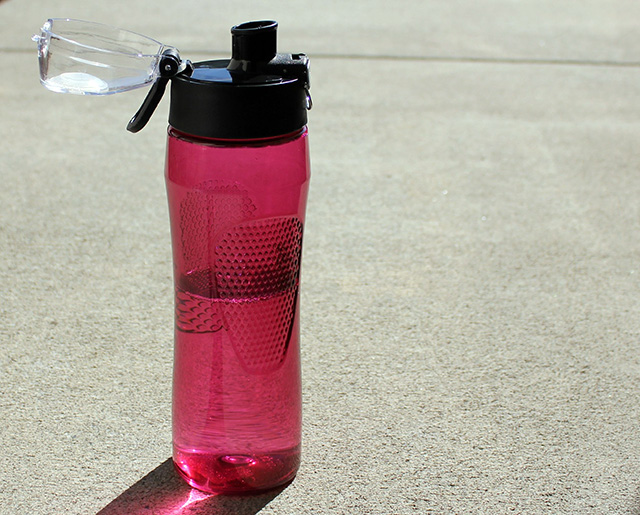 A randomized crossover design, with two conditions (high and low flow rate) was conducted to determine if a greater flow rate was to enhance fluid intake over a 1.5-2 hour training session. A 1-litre drink bottle was used and manipulated to create two different nozzle sizes. This was achieved by drilling a hole in the center part of the nozzle piece to increase the flow rate.

Athletes were randomly assigned to either the low flow rate or high flow rate group, ensuring that court position was matched in each group. Three sessions were monitored with all subjects, the first a familiarization trial using the regular (low flow) bottle first, then the subjects were assigned to one of the study groups, and repeated with the other bottle type. Comparing the low flow familiarization trial and the trial repeat with the same bottle allowed for an internal control to ensure each individual drank the same volume on two separate occasions with the low flow rate bottle.

Heart rate monitors were used to compare the intensity of each of the training sessions. Plain tap water was used for consumption in all trials.

Hydration status was monitored by body weight changes (towel dried, minimal clothing) over the training session, and fluid intake was measured by weighing the drink bottles to determine changes in intake during each different trial. Athletes were closely monitored to ensure that they drank from the same designated bottle.

The temperature and humidity were measured on each of the test days to monitor environmental conditions.

Trial one with the AIS basketball athletes showed no difference between the greater flow rate bottle and the regular bottle. Most of the athletes closely matched fluid intake with their sweat losses to maintain body weight over the training session.

The duration of the netball training session was shorter than the trial one participants, and heart rate analysis showed that the intensity was also well below that of the basketball sessions. Both trials were conducted in fairly cool conditions meaning a lower sweat rate, and greater ease in matching fluid intake. If the temperature was hotter or the intensity of the sessions were greater there may have been a greater difference seen.

These findings also create some discussion around how an athlete monitors and replenishes their own fluid intake. An athlete may drink the desired amount of fluid until they have satisfied their thirst, or may habitually just drink a certain amount, or take a certain amount of sips. If the flow rate is greater coming from the bottle in the third situation, then the athlete may be able to get more fluid into the mouth without even realizing it. Considering that this study found that a similar amount of fluid was ingested, irrespective of the flow rate, would indicate that the athlete is good at monitoring how much fluid they are ingesting, and adjusting accordingly.

Providing water bottles during training and competition helps to enhance hydration during an exercise session. This increase in assistance may be more important than any difference or increase in the flow rate of a drink bottle.