Are motocross riders the fittest athletes in the world?

Competitors in many sports like to think that their sport is the hardest to do, the most physically demanding. There are many lists of the fittest sports, with boxing and gymnastics commonly on top. See our discussion about the Fittest Sports for details. Motocross riders are rarely considered, but should be.

Ever since motocross failed to be listed on the ESPN List of The Most Demanding Sports, there has been great discussion on this site about the physical demands of motocross riding. A online vote of the world's most demanding sports listed motocross at the top, and in our vote it is currently 5th.

There is no doubt that it is a tough sport. As well as a lot of anecdotal evidence of how demanding the sport is, many have pointed out that there have been a couple of scientific studies that have supported their assertions.

Motocross is a very physically and mentally challenging off-road motorcycle sport, which is raced on natural terrain with man-made obstacles. While undoubtedly the bike does a lot of the work for the rider, to manoeuvre and stay on the 200+ lb machine requires a high level of strength, power and endurance. The riders need to be light and strong, with good strength of the upper body, shoulder and arms, hand grip and legs. A study by Gay et al. found that during a motocross race heart rate is quickly raised, and the competitors average heart rate was between 92-96% of their maximum, indicating that there are very high demands on the aerobic endurance system. See more about fitness for motorsports. 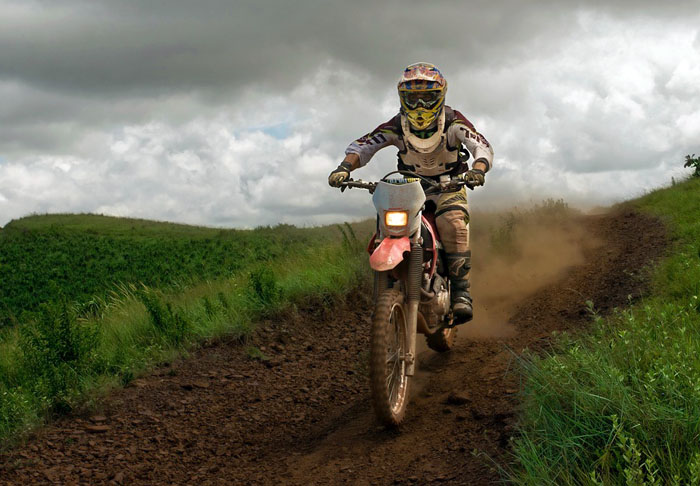 Motocross bike on a dirt track

Motocross is definitely physically tough, though is it the most demanding of all sports? It is not an easy thing to measure and compare the fitness of athletes from different sports. You can compare fitness test scores of athletes, but there are issues of varying protocols and athlete levels, and there is not a lot of data on motocross riders for comparison. It is best to compare head to head battles. There are two oft reported studies which have directly compared motocross riders to other athletes, one in 1979 by the National National Athletic Institute and another in 2002 by the University of Pittsburgh Medical Center's (UMPC) Sports Performance Complex.

A study was conducted in 1979 at the National Athletic Health Institute in Inglewood, California, founded by pioneer sports orthopedists Drs. Robert Kerlan and Frank Jobe. The original article apparently appeared in a Cycle magazine in early 1980, though this article or any research paper has not been sighted. The information below has been gained from various online reports.

One report stated the highest scoring sports were found to be long-distance running, gymnastics, wrestling and motocross racing, while another said soccer was top over motocross.

2002 by the University of Pittsburgh Medical Center

A study was conducted in 2002 at the University of Pittsburgh Medical Center's (UMPC) Sports Performance Complex, headed by Alan DeGennaro, the director of UPMC's Sports Performance Program and Brian Hagen, director for rehabilitation medicine at the sports complex. The testing began when the nation's best motocross racers traveled to Pittsburgh for the Steel City Nationals (Round 12 of the U.S. Motocross championships) in Delmont Labor Day weekend in 2002. A battery of tests was performed on about a dozen riders, including Broc Glover and Hannah.

Without the specific details of the results of these studies, no conclusions about the claim of motocross riders being the fittest can be made. The lack of published physiological data of riders highlights the need for further study. The data so far indicates that the sport of motocross should be considered in all the discussions about the fittest sports, though there are several other sports worthy of the claim to be the world's fittest sport!

Here are a few more mentions of other studies that I have found online, but were unable to find any more evidence. Let me know if you have details to add or can verify the details below.