History of the Australian Socceroos at the World Cup

Australia has a rich sporting history, winners of many world sporting championships, though its participation at the premier world sporting event - the FIFA World Cup of Football - has been limited. They have reached the World Cup Finals five times, in Germany 1974 and 2006, South Africa in 2010, Brazil in 2014 and have now added Russia in 2018.

It has always been a hard road to the World Cup for Australia to follow. Australia's first attempt to qualify was in 1966 in England. During that first attempt to qualify, Australia had to play off against North Korea, which was a controversial match up as North Korea was a political entity not recognized by many nations including the United Kingdom. The match was played in neutral Cambodia. Future campaigns for the 1970, 1978, 1982, and 1986 World Cups would see Australia play off for a spot in the World Cup though round-about means and against a variety of nations. The qualifying process was somewhat simplified from the 1990 World Cup onwards. 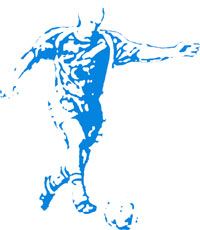 In Australia's qualifying matches for USA 94, Australia had to endure 3 playoff stages. The first stage was the Oceania playoff - beating New Zealand in the final. Following the win in the Oceania playoff, Australia then beat Canada, the CONCACAF 3rd round runner up in a 2-game playoff. Australia then qualified for the 2-leg playoff against the South American group 1 runner up, Argentina, which they lost in a close series, denying Australia a place at the 1994 World Cup in the United States.

For the 1998 World Cup, the Oceania Football Confederation (OFC) was granted a 'guaranteed' 0.5 qualifying spot. In 1997, after winning the OFC qualifying tournament, Australia lost to Iran over two legs and missed their chance to play in France. In 2001 Australia again won the Oceania Confederation qualifying tournament. However, Australia lost in a two leg playoff - this time against the 5th placed South American team, Uruguay. Following a 1-0 home win, they were beaten 3-0 in a return game, and missed their chance to play in the World Cup finals to be held in South Korea and Japan.

Despite their turbulent history, Australian football is on the up and up, buoyed by a 3-1 win in England in 2003 and other successes including making all the World Cup finals from 2006 onwards.

The Socceroos performance in 1974 was credible but not spectacular, not scoring a goal in their three matches. Following defeats by the former DDR and subsequent world champions Germany, they held Chile to a creditable 0-0 draw in their last group game but were still eliminated.

In 2006, the long wait was over for Australia. After 32 years the Socceroos returned to Germany, scene of their one previous FIFA World Cup finals appearance in 1974. Their performance in Germany surprised a few, and increased the profile and popularity of Football in Australia. Their dream run at the World Cup came to an end in a spectacular and frustratingly disappointing manner. Australia was able to hold Italy scoreless for nearly the whole game, until literally the last few seconds of regular time Italy were awarded a dubious penalty, eventually winning the game 1-0. Italy was the eventual Cup winners.

Their performance in the 2006 World Cup gave soccer back home in Australia a great publicity boost, and with this momentum the national team continued their success and qualified again for the 2010 World Cup. For the 2010 campaign, Australia moved to the Asian Federation, and played a series of qualification matches against Asian nations.

In their first match, Australia had a poor showing in the first game against Germany, with a red card given to striker Tim Cahill. The Socceroos redeemed themselves with a gutsy draw with 10 men against Ghana, with another of their gun strikers Harry Kewell being sent off. In their last match, they had an inspiring win against Serbia. Australia finished with 4 points, the same as in 2006, but missed out on progressing due to a poor goal difference.

Australia finished the 8 games of the Asian World Cup qualifying group B with 3 wins, 4 draws and one loss. This was enough to finish in second place behind Japan, and to qualify for the 2014 World Cup. In Brazil Australia was drawn in Group B alongside reigning Cup holders Spain, 2010 runners-up Netherlands and Chile, called by some commentators as the group of death. The team was praised for their outstanding efforts in a tough group, though finished with three losses.

By the time Australia had secured their place at Russia 2018, becoming the 31st of 32 teams to do so, they had played 22 matches, more than any other side in World Cup qualification history. Australia was drawn in Group C with France, Peru and Denmark. They played three matches, resulting in one draw and two losses. Both of Australia's goals were from the penalty spot by Mile Jedinak.

The next World Cup will be in Qatar 2022, the women's world cup will be in Australia/New Zealand 2023. See more firsts and other trivia, and also information about each country at the World Cup.